Blog - Latest News
You are here: Home / Lost in (mis)translation? English take on Korean novel has critics up in...
A row over Han Kang’s award-winning novella The Vegetarian highlights the unavoidable difficulties of importing a novel from a very different language – but literal translation too often results in poor books
Another week, another round in what I shall henceforth refer to as Han Kang-gate – though Smith-field might be more accurate, evoking the London meat market, since the centre of this literary scandal is not the Korean writer but her English translator.
It began last summer in the New York Review of Books, when the writer Tim Parks laid into Deborah Smith’s translation of The Vegetarian. He professed himself mystified that it had won the Man Booker International prize, when “the prose is far from an epitome of elegance, the drama itself neither understated nor beguiling, the translation frequently in trouble with register and idiom.”
Parks was clear that he didn’t like the novel in English, but he was also clear that he didn’t know Korean, so couldn’t make a direct comparison with the original. Weeks later, he was joined by academic Charse Yun, writing in Korea Exposé. The Vegetarian was originally published in three parts and Yun reported upset among the students at his Korean university. According to one speaker at a 2016 conference, he said: “10.9% of the first part of the novel was mistranslated. Another 5.7% of the original text was omitted. And this was just the first section.” 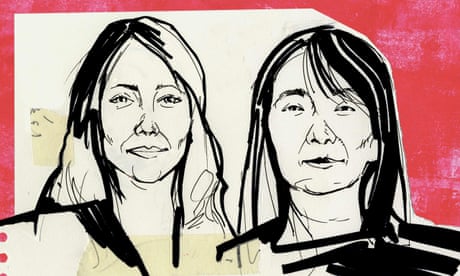 Han Kang and Deborah Smith: ‘It is fascinating to ponder the possibili­ties of language’

Yun conceded that “it’s important to keep in mind that niggling errors occur even in the best of translations, and any scanty, cherry-picked, line-by-line comparisons from a 200-page book will inevitably appear trivial, if not petty, when posted.” The niggles included using “foot” (bal) for “arm” (pal) in a door-shutting scene that he conceded may even have been improved by the substitution. More serious “mistranslations” include the novel’s opening line: Han writes that the protagonist’s husband never really thought of his wife as “anything special”; Smith renders this as “completely unremarkable in every way”.

Most serious of all, Yun wrote – reprising his attack in the LA Times – were the stylistic differences between the English and Korean versions of the novel: “I find it hard to come up with an adequate analogy, but imagine the plain, contemporary style of Raymond Carver being garnished with the elaborate diction of Charles Dickens”.
Last week, Smith herself responded in the LA Review of Books, arguing that “to say that my English translation of The Vegetarian is a ‘completely different book’ from the Korean original is, of course, in one sense, entirely correct. Since there is no such thing as a truly literal translation – no two languages’ grammars match, their vocabularies diverge, even punctuation has a different weight – there can be no such thing as a translation that is not ‘creative’.”

Part of the narrative that now surrounds Han’s international celebrity is that Smith only started learning Korean three years before taking on The Vegetarian. Never mind that they negotiated every word of the translation, and that Han herself stands by it: this remarkable history makes Smith a sitting duck for the sort of intellectual condescension that is revealed in Yun’s assertion that “the number of mistranslations … is much higher than one would expect from a professional translator”.
But Korean literature’s historic problem, in my experience, has been those same “professional translators” – nearly always translating into their second language – who have throttled the literary life out of it, preventing sophisticated and important writers such as Hwang Sok-Yong or Yi Mun-Yol from taking their rightful place on the world stage.

Reviewing a new translation of Tolstoy’s War and Peace a few years ago, New Yorker critic James Wood remarked: “Literary translators tend to divide into what one could call originalists and activists. The former honour the original text’s quiddities, and strive to reproduce them as accurately as possible in the translated language; the latter are less concerned with literal accuracy than with the transposed musical appeal of the new work. Any decent translator must be a bit of both.”

The dominance of “originalists” in the Korean tradition has left half a century of classic literature, from one of the world’s most fascinating, and politically critical, regions languishing in dusty academic editions that are virtually impossible to read.
It is a literature that poses cultural as well as linguistic challenges. An ironic precedent to Han Kang-gate was the translation of Yi’s 1987 novella Our Twisted Hero, in which a schoolboy is manipulated by a despotic school prefect, with the blessing of their teachers. One of Korea’s few international successes at the time, it was translated by an Irish priest, Kevin O’Rourke, introducing a powerful allegory of dictatorship to generations of US schoolchildren – but as a simple, anti-bullying parable. (So rare are fluent and committed translators on the peninsula that O’Rourke and a Cornish monk, Brother Anthony of Taizé, have pretty much put south Korean poetry – the jewel of its literature – on the international map over the last half century.)

“Translating from Korean into English involves moving from a language more accommodating of ambiguity, repetition, and plain prose, to one that favours precision, concision, and lyricism,” writes Smith, who has now translated two further works by Han – Human Acts and The White Book. To which one can only respond, God help those English language readers who find themselves battling through the repetition and plain prose to decode the ambiguities unaided by the imaginative ministrations of an “activist” translator like Deborah Smith.

“Translations should be critiqued, absolutely; lively, informed critical engagement is all part of a flourishing translation culture,” she says, conceding that she has worked with Han to correct any errors for subsequent editions of The Vegetarian.
But as she also writes: “Without taking into consideration how translation norms vary between countries and contexts, and how this might shape individual approaches, it’s hard to move on to the point of difference rather than just pointing it out.” As Franz Kafka might say, there’s more than one word for beetle.
This post originally appeared on The Guardian

Is process standardization the right strategy for LSPs? 2017 Localization Trends & Predictions for 2018
We use cookies to give you the best experience on our website. By continuing to use this website, you consent to our use of these cookies.ContinueRead more