It is easy to assume that bilinguals are better at adding another language to their repertoire. But is that always true?

Evidence from English language learning in multilingual classrooms in Europe

This is the question explored by Professor Peter Siemund from Hamburg University in his lecture in the Lectures in Linguistic Diversity series at Macquarie University.

Professor Siemund started out by identifying a paradox of multilingualism research: multilingualism is often thought to be an advantage for both cognitive development and learning, but, at the same time, cross-linguistic influence research shows that speaking more languages often leads to more negative interference in the learning of subsequent languages.

For instance, he cited research (Lorenz, 2018) that found that Turkish and Russian monolingual learners of English were able to get the meaning of the English progressive aspect right 100% of the time. In contrast, German-Turkish and German-Russian bilinguals only got it right about as frequently as monolingual German speakers. It seems obvious that transfer from German, which has no progressive aspect, negatively affected the English language learning of these bilinguals. So in this case, bilingualism did not help but hinder when it came to this particular grammatical feature of English language learning.

In another study described by Professor Siemund the relationship between reading comprehension scores in German and another language on the one hand and test scores in English on the other were examined. It was found that German comprehension skills correlated with English test performance for German-Russian bilinguals but not for German-Turkish bilinguals. This highlights the fact that bilingualism is not a unitary phenomenon and is different depending on which languages are involved. 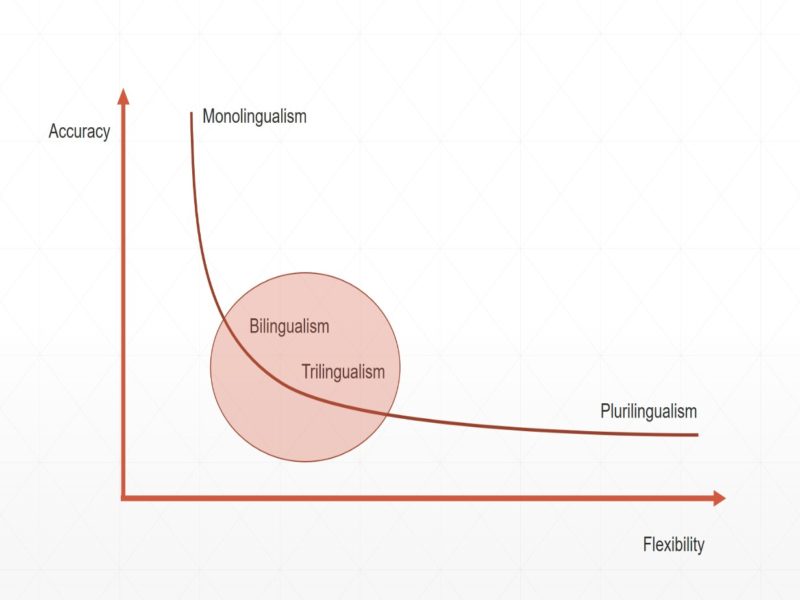 It is not only bilingualism that is not a unitary phenomenon but the same is true of language learning. What do we mean when we say that someone is a good language learner?

One relevant dimension is linguistic accuracy; another is linguistic fluency. In my own experience as a language learner and teacher, learners who are more accurate are often less fluent, while those who are more fluent often sacrifice accuracy.

What do these findings mean for advocacy?

For those of us who are interested in advocating for the rights of migrant language speakers, it can be tricky to talk about the disadvantages of being bilingual or multilingual. It is a balancing act between supporting linguistic diversity and fighting against the discrimination experienced by speakers of minority languages. Supporting linguistic diversity in the abstract sometimes overshadows the fact that some kinds of bi/multilingualism are clearly more equal than others. In fact we already know that being multilingual can be disadvantageous in education and at work, whether it’s for minority language-speaking children who are unable to access education in their first language and standardised tests which discriminate against them or migrants whose linguistic repertoires are problematized in the workplace.

Maybe we need to reframe the question: instead of asking what the advantages or disadvantages of bi- and multilingualism might be, we should ask how we can help ensure equality of opportunity regardless of linguistic repertoire, as Ingrid Piller does in her recent book Linguistic Diversity and Social Justice.

Lorenz, E. (2018). “One day a father and his son going fishing on the Lake”: A study on the use of the progressive aspect of monolingual and bilingual learners of English. In Bonnet, A. and P. Siemund (eds.) Foreign Languages in Multilingual Classrooms (pp. 331–357). Amsterdam: Benjamins.

Lessons in Building a Language Industry Startup How to Identify Your Target Audience for Better Marketing
free dating sites comparison 3 online dating questions
We use cookies to give you the best experience on our website. By continuing to use this website, you consent to our use of these cookies.ContinueRead more